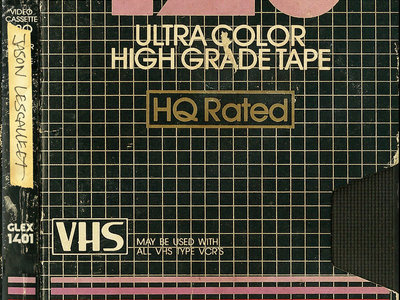 The DVD includes the option to play each of the videos individually in addition to the full-length Tropy Tape video.

In 2012, Erstwhile Records released the 2xCD called SONGS ABOUT NOTHING.
This album was received very well by friends, fans, and critics and appeared on many year-end lists:
(yearendlists.com/2012/12/wire-top-50-release-of-2012).

In 2013, I began soliciting artists to create videos for the 13 tracks that comprise the first disc of SONGS ABOUT NOTHING. I found 13 different artists whose work I respect and admire. 13 artists who understand my music in a way that allows them to create a visual interpretation for an otherwise abstract artform. The results vary greatly in approach and style, but the music maintains a cohesive thread that commands the full attention of viewers for the entire 36 minutes.

I finally completed this project in 2014 and embarked on a short screening tour to showcase these beautiful videos on large screens. It is my goal to screen TROPHY TAPE in each of the cities represented by the 13 collaborators.

INTERNATIONAL ORDERS: please note that this is a NTSC Region 1 DVD. It is not PAL compatible, but it does play on Mac and PC disc drives and/or region-free DVD players.

ships out within 3 days
Purchasable with gift card